As seen in previous post, there are a number of different types of chromatography used in the purification of proteins: 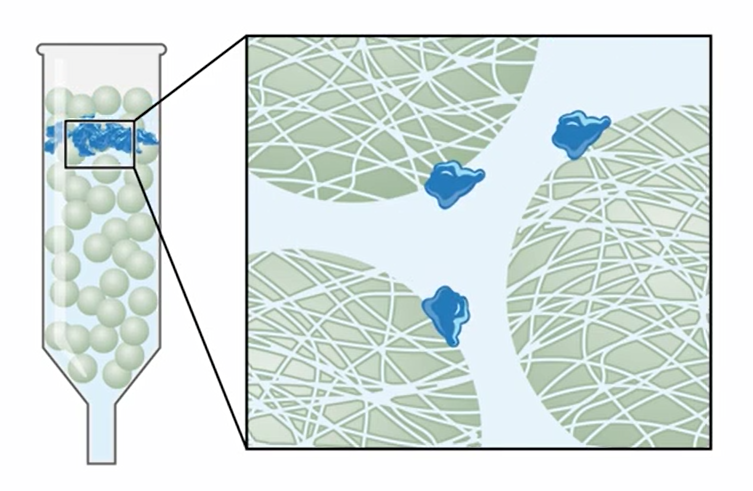 An example of this type of resin is Sephadex (cross-linked dextran), that is porous, yet strong enough so they didn't collapse during operation, and hydrophilic, so that proteins would not irreversibly adsorb to them. 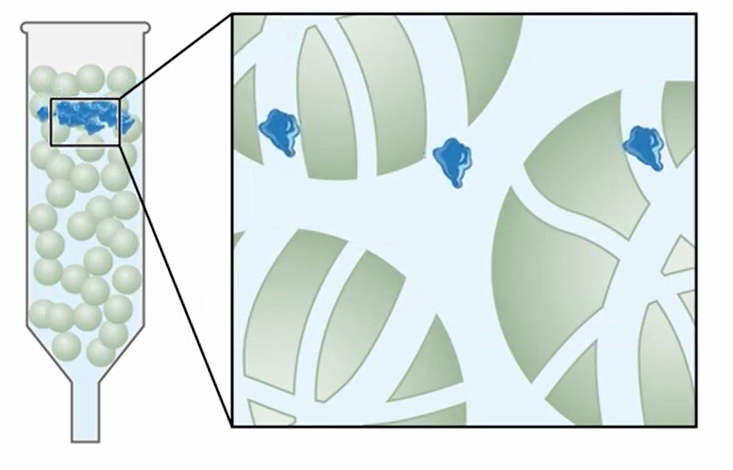 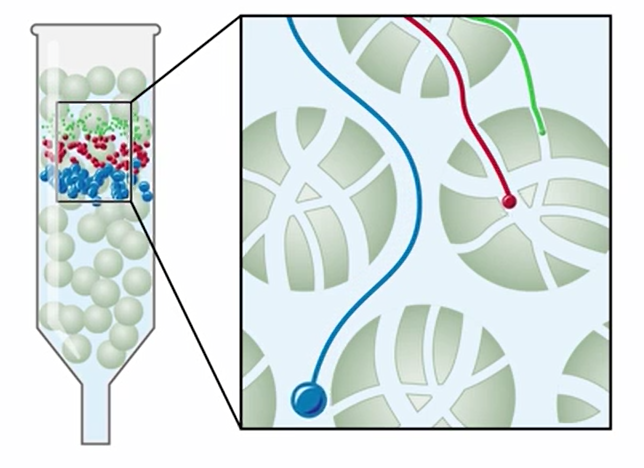 The retention volume for a molecule on a gel filtration resin is given by this equation:

In this case, Vi is the intra-particle pore volume and KD is the partition coefficient of the molecule, and is related to its molecular weight.

Given this, the distance between two peaks is then equal to:

Therefore, a gel filtration material with a maximum difference between KD2 and KD1 and a high pore volume, Vi, will give the maximum resolution and a maximal separation between the two molecules 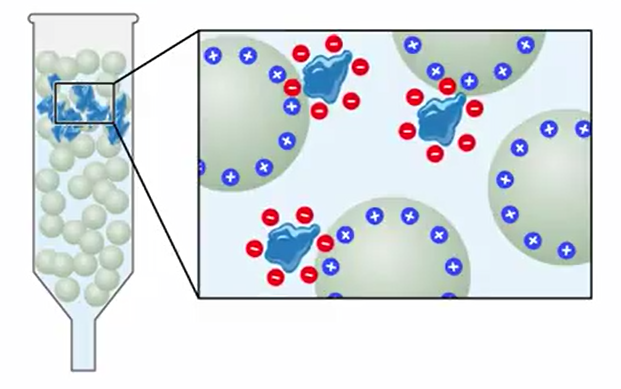 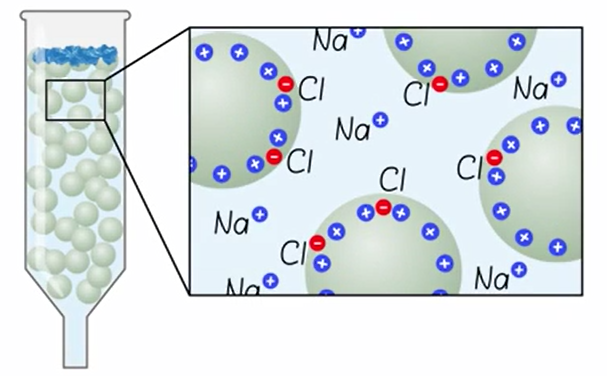 Ion exchange chromatography is most useful as a polishing step to remove charged impurities such as DNA and host cell proteins.

The type of hydrophobic ligand, for example the varying links of alkyl chains, in its concentration on the resin are important parameters of the resin that control its hydrophobicity and separation properties. 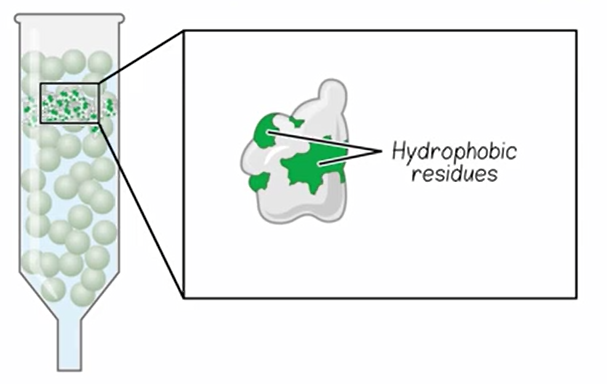 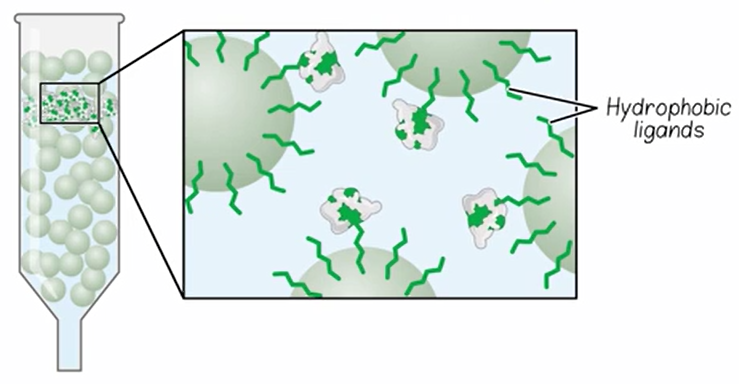 Hydrophobic interaction chromatography is often most useful as a polishing step to remove higher molecular weight impurities that may not be removed by other methods.

In affinity chromatography, the proteins interact with ligands attached to the chromatographic resin. These ligands are chosen for their specific and selective interaction with the target biologic. As the sample is loaded onto the column, the target biologic will bind to the ligand, while other impurities will not. We can then recover our protein with an appropriate elution buffer, usually of low pH. 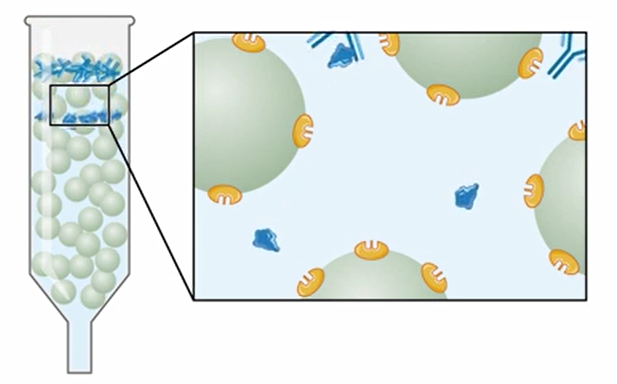 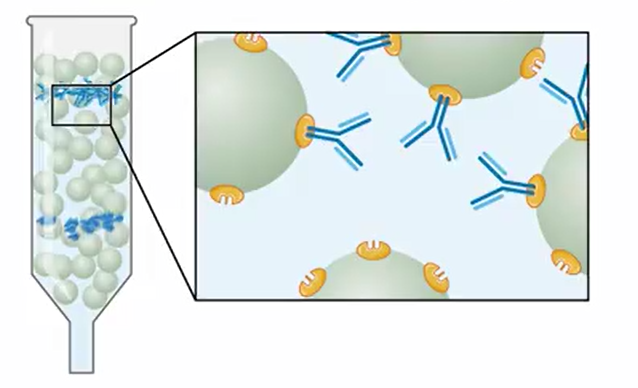 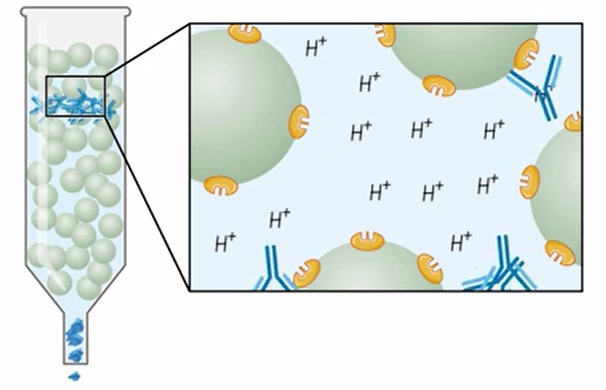 We can define the binding capacity, Q, as the concentration of the total number of binding sites on the resin, C sub S, plus S Solving for C sub s gives us the following, which is known as the Langmuir adsorption isotherm.

So, the retention volume is giving by this equation:

Where A sub S is either the total area of adsorbent on the column, or the weight of adsorbent.

Hello there,\n\nMy name is Aly and I would like to know if you would have any interest to have your website here at adareng.com promoted as a resource on our blog alychidesign.com ? \n\nWe are in the midst of updating our broken link resources to include current and up to date resources for our readers. Our resource links are manually approved allowing us to mark a link as a do-follow link as well\n.\nIf you may be interested please in being included as a resource on our blog, please let me know.\n\nThanks,\nAly\n