Broadly, chromatography refers to a number of separation techniques where molecules are distributed between two phases: a stationary phase, often a chromatography resin, and a mobile phase or eluent, which in the case of protein separation, is a solvent such as water or chloroform.

In column chromatography, the mobile phase, or eluent, is pumped through the column filled with a stationary chromatography resin.

In the simplest form of operation, the components to be separated travel through the column at different speeds and are collected at different times at the outlet of the column. 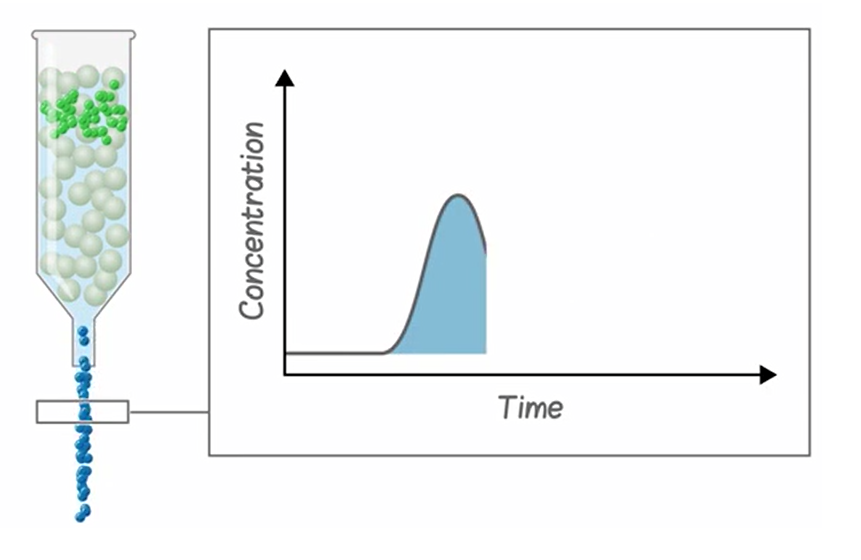 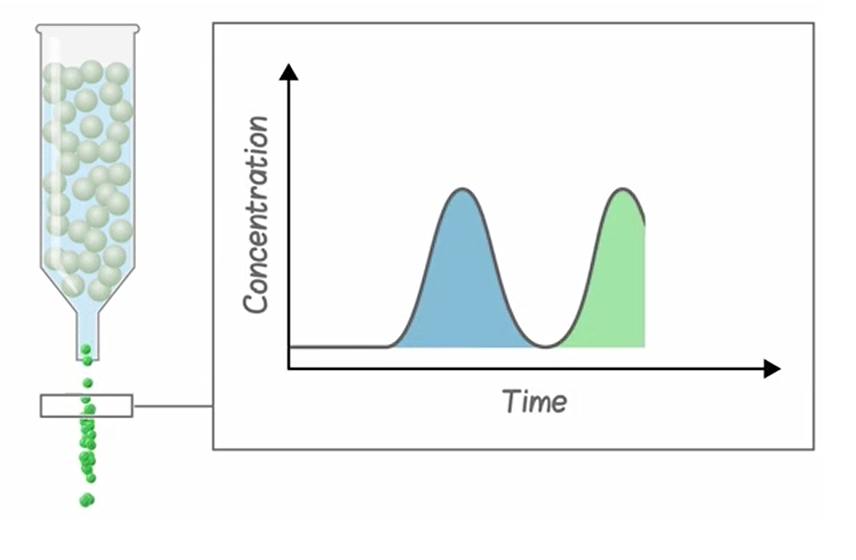 There are a number of different types of chromatography used in the purification of proteins: 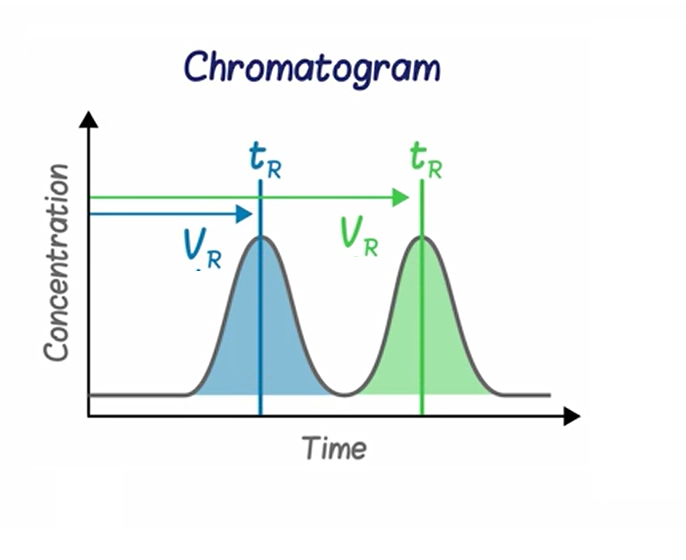 We can determine how well a molecule is retained by the column by calculating the retention factor, k

Here V0 is the void volume, or the total volume of the mobile phase within the column.

The goal for any chromatographic operation is the separation of two or more species. The measure of the ability of a column to separate species is known as the peak resolution, RS. It is defined by the following equation:

Here, VR2 and VR1 are the retention volumes for two different molecules with VR2 > VR1 and wb1 and wb2 are the widths of each chromatographic peak at its base. 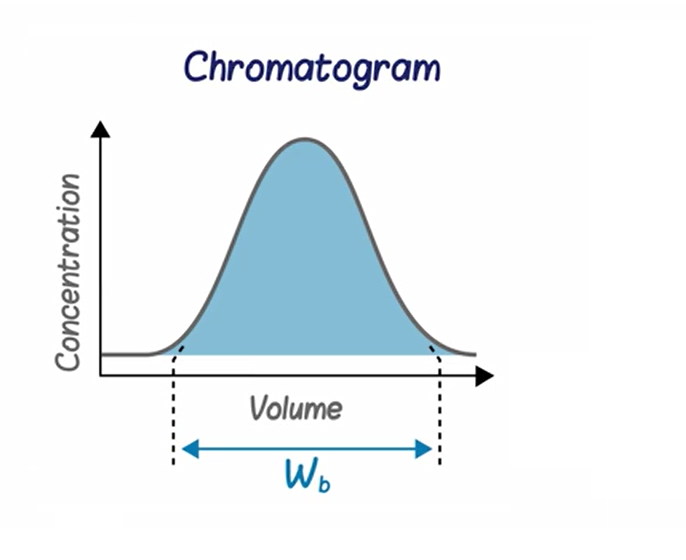 To completely separate two molecules, RS must equal at least 1.5.

The shape of a chromatographic peak is also indicative of how efficient the column is.

The column efficiency N, also known as the number of theoretical plates, can be calculated using this equation.

Because all symmetrical peaks should have roughly the same value of N, N is a property of the column. The larger N is, the narrower the peaks, and the better the column. 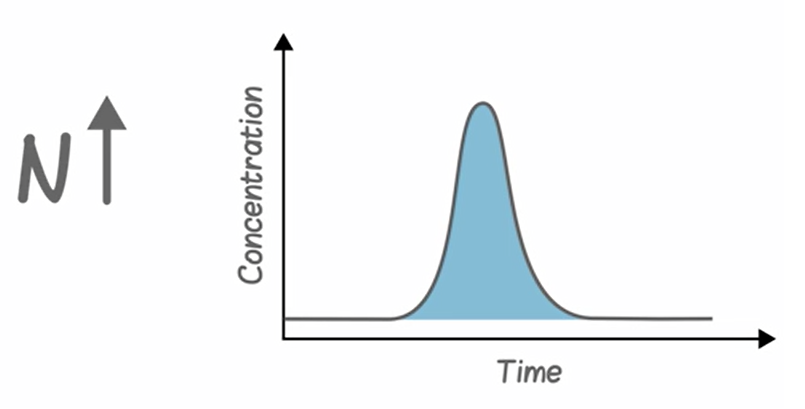 All other things being equal, a longer column will have more theoretical plates than a shorter one. So it's often useful to calculate the height of a theoretical plate H by dividing the length of the column by the number of plates.

Here, the smaller the plate height, the better the column.

The peak resolution can also be related to N, and with some algebra, we get this equation. 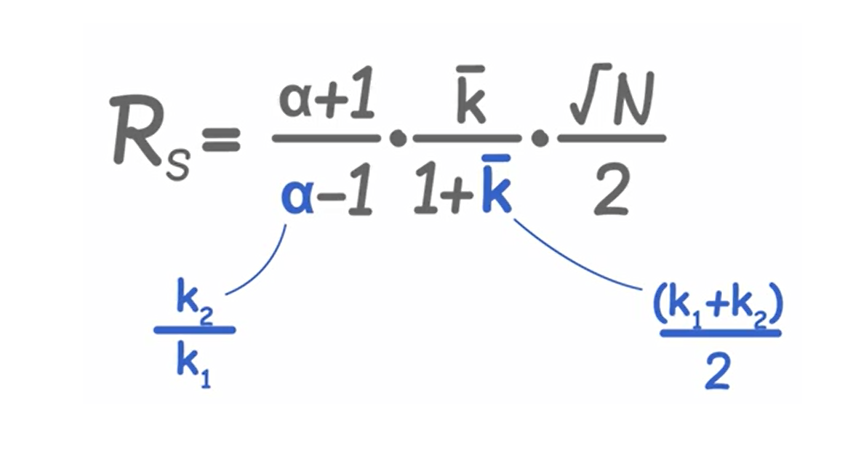 The selectivity alpha has the largest impact on resolution.

The selectivity depends on both the resin and the molecules to be separated.

Therefore, correctly choosing the chromatography resin has the largest impact on our ability to separate two different molecules

Interesting design. \nSo, this website very nice, I LLLiked it! :)

Quickly determine column dimensions and easily convert between flow rates, linear velocity and residence time. Get the recommended compression factor as well as the minimum resin volume required to pack a column easily. This tool also provides you with catalogue numbers and links of our comprehensive chromatography media portfolio at your fingertips.

I used to be very happy to find this web-site.I just wrote an very long comment but after I clicked submit my comment didn’t appear. Anyways, just wanted to say thnx

After study a few of the blog posts on your website now, and I truly like your way of blogging.

Hello Martinkax, sorry to hear that. We will verify what happened and will improve the website to fix that error. Thank you very much for following us.

Hello everyone, I am new to, please look at a lot, thank you!

Hello, if you need more visitors you should read about one good method. Just search in google: Jemensso\'s tricks

Welcome to the world of adult Dating loveawake.ru